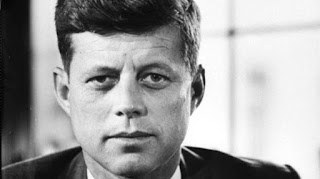 JFK was killed by the same "monolithic and ruthless" people that run this planet. If you want to be free you must fight, there is no other way. Force is all they understand. If you do not fight they will kill you anyway, it's written in stone, see Georgia Guidestones. This fight is soon to come to you, when they go door to door pulling you out of your houses and injecting you with deadly chemicals, it will be the end of all hope.

American Newspaper Publishers Association - New York City
"For we are opposed around the world by a monolithic and ruthless conspiracy that relies primarily on covert means for expanding its sphere of influence–on infiltration instead of invasion, on subversion instead of elections, on intimidation instead of free choice, on guerrillas by night instead of armies by day. It is a system which has conscripted vast human and material resources into the building of a tightly knit, highly efficient machine that combines military, diplomatic, intelligence, economic, scientific and political operations.
Its preparations are concealed, not published. Its mistakes are buried, not headlined. Its dissenters are silenced, not praised. No expenditure is questioned, no rumor is printed, no secret is revealed. It conducts the Cold War, in short, with a war-time discipline no democracy would ever hope or wish to match."